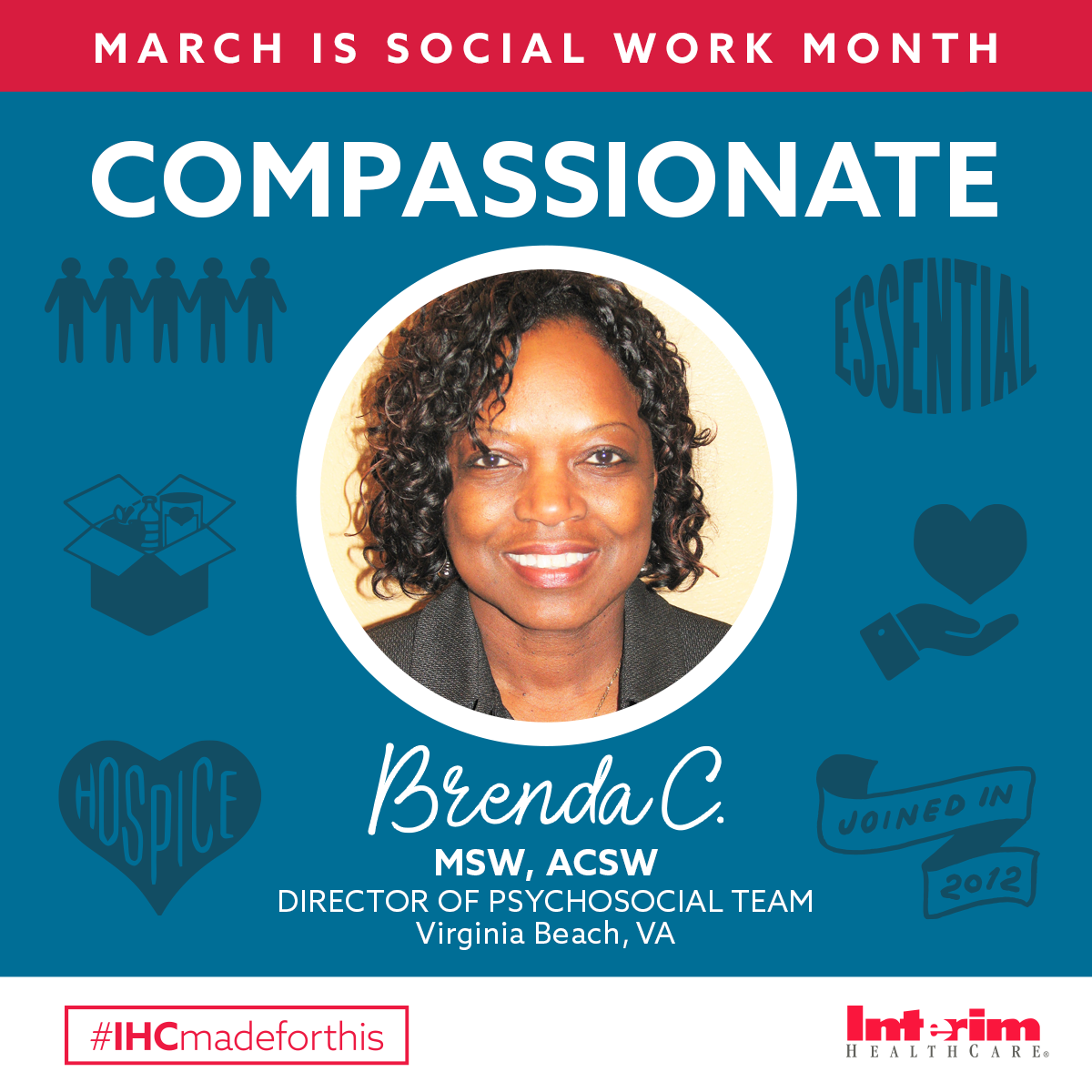 "I've only got one chance to do this; there are no do-overs. So, I put everything I have into it."

This is the heart and motivation behind everything Brenda does. She believes her skills have been given to her for a purpose and she doesn’t take it lightly. Some moments, you only get once, so she seizes every opportunity to make a difference in the lives of others.

Brenda is the Director of the Psychosocial Team at Interim HealthCare® Hospice in Virginia Beach, where she has been caring for those in the final stages of life since 2012. Her compassion for the elderly and heart for the community was instilled in her early on. She recalls sitting at her grandmother’s table as a young girl and being intrigued by older adults. And, her parents modeled the values of social work by the way they lived, always an open door and food to share with others.

Her interest in the elderly led her to Eastern Virginia Medical School, where she had the privilege of working with a geriatrician. Encouraged to take her skills to the next level, Brenda applied to graduate school. During that time, she received a grant to travel the country, including South Africa, to learn about social work and its impact on the world. It’s been an amazing journey full of rich experiences.

While finishing her graduate degree, Brenda had the opportunity to work with a hospice organization and that’s when the love just took off. She considers it an honor to be there for someone at the end of their life and she is dedicated to helping her patients and their families each step of the way. Brenda worked there for 12 years before they sold to another company. At that time, a social worker from Interim HealthCare Hospice in Virginia Beach sought her out. She was moving and promised to find the owner, David Haslup, a really good social worker to replace her—that person was Brenda.

Upon meeting, Brenda knew this was the next step in her journey. After working there a few months, she approached David with the idea of starting a foundation. He was very receptive, but the timing wasn’t quite right. Two years later, he said, “We’re ready now, let’s do this.” And, Brenda began gathering all the people and resources she needed to make it happen. They named it the Lorraine Bethea Hospice Foundation in honor of a well-respected hospice nurse who died in 2015. The foundation provides intentional acts of kindness to people at the end of life.

The first memory gift went to a young lady whose mom was dying. She was seven months pregnant and an only child. All she wanted was for her mom to be there somehow; that her child would know that her grandmother knew her. Brenda had an idea she called, “Hands on the Belly.” She arranged to have a doctor who is a photographer take a photo of the mom’s hands and daughter’s hands on her belly. That photo hangs in the child’s bedroom today and is so meaningful.

In addition to the foundation, Brenda hosts an annual event that honors mothers and the legacy they left behind called “Celebrating Mom: The Life, the Love and the Legacy.” In everything, Brenda gives glory to God for the things He has done. He has opened so many doors in her life and has given her the boldness to step out in faith and make an impact.

The most fulfilling part of working for Interim is that she is heard. She is able to use her talents in creative ways that make a difference every day. To Brenda, Interim is more like a family and she feels fortunate to work with a team of people who share her passion.

When she looks back on her life, she wants it to be said, “I did what I could, while I could.” In every way, Brenda is made for this!

Interim HealthCare is the nation’s first home care company. A leader in our industry, we’ve been matching compassionate caregivers like you to clients in their homes since 1966. While we are national in scope, we operate through 300+ locally owned offices. At Interim, we are passionate about providing the kind of personalized care you can’t find anywhere else. We are a family of caregivers who are changing lives. It’s who we are.

Your story led up to this one defining moment. Are you ready for the next chapter?